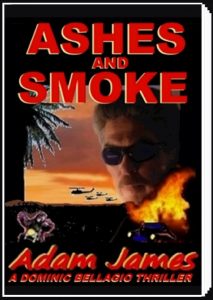 FOLLOWING A LIFETIME of undercover operations, Dominic Bellagio takes refuge in Southern California where he’s living the quiet life at the beach surfing, fishing, jogging along the shore and playing keyboards in a local jazz combo.

Then his old black ops partner, Eduardo “Cat” Catalanos, shows up out of nowhere with a load of unfinished business that upends Dominic’s relationship with his new girlfriend and propels him into the shadow world of betrayal and sudden death that he thought he’d left behind so long ago.

Is it true that revenge is a dish best served cold and what happens when you find the demon you have been searching for? It’s all here — sharp writing memorable characters and lots of twists and turns in the story. What  more can you ask for.

IN THE BACK . . . Franco clears the remaining glass from the shattered bedroom window with the muzzle of his gun. Dominic crouches behind him with his hands cupped together. Franco places his right foot into Dominic’s cupped hands and catapults headfirst through the open window.

Except that he plows headfirst into the TOP of the window frame. From there, the world goes black. For the briefest moment he teeters. Then his knees buckle and he falls to the ground. Out cold.

Immediately, Dominic grabs Franco’s Glock and dives through the open window. Coming up out of a forward roll he charges across the room, intent upon extracting Angel from beneath Bitsy’s mountain of blubber.

Only before he gets to her, he spots movement in the darkened hallway. Already in a heightened state of awareness, his sense of time and space is stalling and thickening. Struggling against inertia, it takes all his strength to nudge the muzzle of his gun toward the hallway.

Centering on the hallway, he squares up—stance wide, arms outstretched—in a two-handed grip. At first recognition of a human shape—a shadowy silhouette of a head and shoulders—his trigger finger twitches three times.

In the muzzle’s flare, Dominic sees a huge monster of a man, bigger and taller than anyone—long hair flying, wiry, tangled beard splayed out, eyes big as saucers, mouth open wide, gold teeth glinting. Two bare arms the size of tree limbs protrude from a black tank top that’s decorated across the front with the head of a snarling green and red snake. The snake’s gaping maw exposes four golden fangs dripping with venom. Stenciled across the shirtfront below the snake’s head four words succinctly spell out the Sidewinders’ mantra.

DON’T FUCK WITH ME

Clutched at the end of the big man’s right arm in a ham-sized fist is a good imitation of a .357 Magnum the size of a canon. As an angry tongue of flame belches from the .357, Dominic realizes that his own three shots have gone high. Both men move in fast, circling and firing at point-blank range. Dominic’s forehead burns as hot blood streams down his cheek. With rounds snapping overhead, he drops into a crouch against the bedroom’s back wall.

Firing blind into the shadows, Dominic empties the Glock. From everything he’s seen, the bearded giant must be Bart Lodge. And here he comes again.

Still clutching his smoking but empty gun, Bart barrels through the bedroom doorway, shoulder dropped and targeting on Dominic’s gut.

Dominic manages to sidestep Bart’s main thrust, but takes a powerful blow to the chest. Bart’s momentum carries both men across the room.

Dominic careens off the big snake reefer, crushing its glass front and upending the whole contraption. Its occupants, Huey and Dewy, now roused from their slumber, survey the room in bewilderment.

Jumping to his feet, Dominic slams Bart across the face with the butt of his gun, opening a nasty gash beneath Bart’s left eye. Only Bart simply shakes it off and slams Dominic in the head with his pistol. From there, the two men, lock together like a couple of frenzied dancers, waltzing around the room, crashing into walls, crunching the remnants of the snake refer and nearly stomping its former occupants to death.

Using their empty guns as blunt force weapons, the two men hack away at each other, until Bart gets the better of Dominic.

After taking three severe wallops to the head, Dominic crumples against the wall. He’s seeing stars and his face feels like it’s on fire. As Bart winds up to deliver a killing blow, Dominic blindly slams the butt of his gun onto the bridge of Bart’s nose, which flattens and showers both men with blood.

Running on instinct, Bart throws a wild left hook that drops Dominic to his knees. By this time, Bart is wobbling on the edge of a darkening abyss. Nearly unconscious, his flight response and a desperate flood of adrenaline propel him across the room into the safety of the darkened hallway.

From a crouch, Dominic follows Bart’s retreat. While clutching his bloody gun in his right fist, Dominic yanks his KABAR from his boot using his left hand and lets it fly. It’s a smooth move. His years of practice pay off when he hears the knife’s impact and Bart’s scream, somewhere down the darkened hallway.

Dominic lurches across the room and grabs hold of Bitsy’s sweaty bulk. Unable to lift her, he manages to roll her off of Angel. Bitsy neither voices a sound nor moves in protest. Another goner, Dominic thinks.

Soon as Bitsy’s crushing mass falls free, Angel’s eyes blink open. At the sight of a large man dressed in black with blood streaming down his face, she screams.

Dominic hoists Angel upright and pulls her into a tight embrace.

With Angel’s head pressed against his chest, Dominic back-peddles across the room. Impacting the remains of the broken window with his backside, the two of them break through into the cool night air surrounded by a shower of splintered wood and broken glass.

By this time Franco has recovered. He jerks Angel to her feet.

“Tuh-take her, Franco! Dominic gasps. “Just take her and go.”

Franco hoists Angel across his shoulders and runs for the safety of darkness. Dominic sits, pops a fresh magazine into his gun, struggles to his feet and spits blood. His numb nose and mouth feel like they’ve doubled in size. But he’s back in business and none too soon.

Right then a shooter makes an appearance at the window. He’s a scraggly, skinny guy with thinning hair pulled back into a ratty ponytail. He wears a black, snakehead tank-top like Bart’s, and his bare arms are covered with tats.

He’s holding an M-16 and cuts loose with a hip-shot on full automatic. A sustained burst of gunfire streaks from the shattered window into the dark void beyond.

From where Dominic crouches in shadows, he’s already lined up for a clear shot and takes it. His three-round burst catches the skinny guy in the midsection. The impact doubles him over and sends him staggering backward into the wall, whereupon he manages to squeeze the trigger on his M-16 one last time. A hail of bullets harmlessly tattoos the floor boards.

Staying low, Dominic duck-walks across the back yard in the direction of the dog kennels, where the three caged pit bulls are going out of their minds. No longer barking, they’re shrieking with rage and slinging their bodies against their wire gate, sending long strands of spittle arcing into the darkness.

If this isn’t enough, a fusillade of bouncing red tracers erupts directly through the back wall of the house. From deep inside, somebody cuts loose with an M-60 machine gun.

Now the entire back wall of the house is coming undone. Dominic shrinks even closer to the demented pit bulls and buries his face behind his arms. Against a background of sparks and splintering siding, eerie clouds of vaporized sheet rock take flight into the night sky.

Next, the shooter moves over to what remains of the ruined window and unleashes another torrent into the side yard. After that, he loops a red stream of tracers up along the hillside. Soon as he pauses, Franco answers with three quick shots—the deadly triple tap.

Suddenly, Franco is behind him. “So what’s happening with Angel?”

“She’s fine. Just how the hell are you doin’? Your face looks the worse for wear.”

“Thanks. It feels like it, too. But I’m good. Now, if you’re finished chatting, can we get the hell outta here?”

Only just then, the gate restraining the hysterical pit bulls miraculously pops open.

ALL RIGHTS RESERVED, including the right of reproduction in whole or in part in ANY form.